2010 Odyssey in Weight Loss - Quarter 4: The Most Wonderful Time of the Year

If there was one way to describe my behaviour in the third quarter, it would be this: Asleep at the wheel. I failed to recognize the changing landscape and I just kept on course, even though that course was headed straight for a cliff. Fortunately, I woke up and managed to steer clear of the abyss. 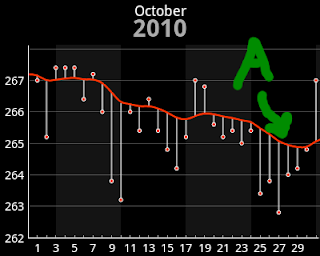 October started with the progressive implementation of two new rules that would set myself up to reach my first major milestone. The first one, which was implemented on day 1, was to go up the stairs, 20 floors, four times a week. I was extremely lucky for this one, because a group of cool motivated people at work were already doing this on a daily basis. All I had to do is attach myself to that group. Motivation is always easier in a group. And it's also much more interesting to talk your way up, than to do it alone, in silence.
The second one was the complete boycott of everything related to bloody machine. This means the machine itself, the coffee machine next to it (instant ain't so bad) and any activity benefiting from the revenues of either. I cannot force them to fix the problem, but I can make bloody sure I don't support them until they do. But control is a hard thing, when faced with these options everyday. So I applied control where I could: No change. I empty my pockets of loose change every morning. And I try to never create a situation where I will have spare change in my pocket.
A very wise friend once said to me: The best way to win in life is to pit your weaknesses against one-another. Instead of trying to fix your weaknesses, find out if another one of your weakness would be able to deal with this one. The original weakness being gluttony, the ones used against it would be sloth and pride.
Sure every time I go for a glass of water in the kitchen I am stared down at by the machine and its contents. But will I step on my pride and ask for change? Not really. Will I break a 20 by making the effort of going down the elevator to buy some from the dépanneur? Meh. Maybe I don't want this crap so much, now.
The results of these two rather draconian measures was instantaneously felt, and my weight started to drop rapidly and consistently. I lost a bit more than 2lbs, and reached a huge milestone (marked with A). 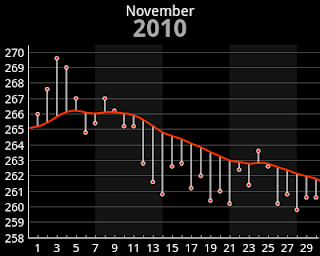 What's that? A rapid climb? A giant bump on the road? Are my new measures failing. No they are not. The point marked A in October signalled my passing from a Class II Obese BMI-rated person to a Class I. Huzzah! And as it was planned since the beginning, this called for a week-long binge and a break from any and all exercise.
Considering the circumstances leading up to the achievement, I could've decided to postpone the binge. But what good is a reward system if you deprive yourself of it when the time comes?
So I crossed the line back up again, but rapidly crossed it a third time. This time, hopefully, for good.
November was a great month. It saw the arrival of a new and important piece in the puzzle: The Kinect. Just as Dance Dance Revolution helped me in the past, Microsoft's motion-detecting gizmo would play a huge role in the upcoming month.
There are two ways to look at November. One could say I lost only three pounds in a full month. I prefer to consider I lost four pounds in under three weeks. December would show that the second way to look at it was a better indication of the future. 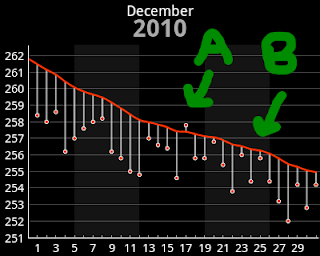 With a winning combination of the morning bike routine, the almost daily 20 floors stair climb, Kinect Dance Central, and the boycott of the machine, December became my best month on the record. With close to seven pounds lost and almost an 100% trend dropping metrics. There was one exception, marked A, when a convergence of Christmas and Birthday-related obligations led to four restaurant meals in a row, and a very tiny bump. But other than that, even the Christmas Eve party (marked B) didn't managed to bump my actual weight above my trend line.
An so my 2010 Odyssey in Weight Loss ends on an very positive note. Although the road through it was bumpy, inconsistent and often doubtful, I managed, at the very last moment, to get back on track and deliver acceptable results.
Lesson learned: Find weaknesses to deal with your other weaknesses. Apply control where it is easiest.
I would conclude with this bit of advice: Find the proper tools to help you. You can succeed with willpower alone, but if you have proper tools you'll have an easier time, and a lower chance of failing. Who knows what these are in your case, but in my case, those were:
Considering my current trend, I have every reason to believe 2011 will see my ongoing weight problem as something of the past. I'll come back to this blog in a year, and tell you all about it. Happy New Year!
Posted by Unknown at 10:10