I began the second quarter reeling from what appeared to be a failure in finding a maintaining a good rhythm. Post GDC con crud was over but I had somehow lost motivation. For a long period (marked A) I even stopped weighting myself. I kept on doing little things but I really had trouble finding my rhythm. 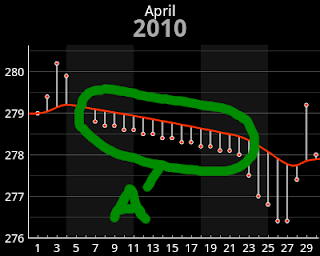 Had I kept weighting myself I would've found out the small steps and attempts I was making were actually working. Something I found out when I stepped on the scale after a while. I only lost a bit more than a pound, but it was still positive.
May marked the discovery of the exercise rhythm that more or less holds up to this day. It goes like this: 1x20 minutes of bike, four weekdays out of five, first thing after breakfast. 1x40 minutes of bike Saturdays and Sundays, anytime between breakfast and lunch.
In May I also managed to strike a sustainable calorie/sweets intake regime. I've tried to simply pull the plug on sweets. But that never worked. It always led to a binge or two, generally in such rapid successions that any gain I made would be instantly lost. Going for granola bars or tiny fun-sized treats also never worked. I would simply eat more because they weren't satisfying.
My own personal favourite: M&M's Tiger Brownies. These have the lowest calories of all their dessert offerings. Even though they recommend cutting it in 12, I managed to cut it in 16 and still get a decent amount of satisfaction from them. They don't taste so good that you can't resist having more, or so bad that they don't give you any satisfaction. 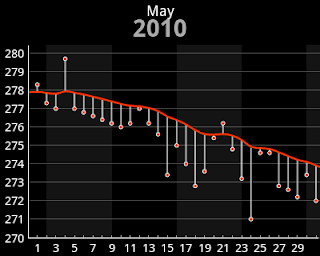 This recipe led to an awesome month of May, with a loss of more than 4 pounds. A pound a week is 52 pounds a year, which would be enough, really. So as long as nothing changed, everything would be fine.
Unfortunately, that wouldn't be. Some people at work had a brilliant idea, and it led to the bumps and slides of June. 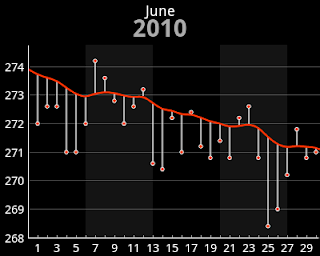 Still, 3 pounds lost in June is honorable. Not great, not even that good. But it's still in the right direction.
The second quarter of 2010 saw me go from 279lbs to 271lbs, so only 8 pounds. Having lost 11 pounds in the first quarter, it meant things were not progressing as they should. But they still were. 20 pounds for half a year means 40 pounds for a full year. Not too bad right? Unfortunately, things would go from bad to worst in the third quarter.
Lesson learned: Numbers are you best friend. Never stop inputting numbers in the machine. Even if they don't speak to you at first, looking back at them might give you more information than you'd think.
More to come in Quarter 3: The Fucking Machine.
Posted by Unknown at 11:58