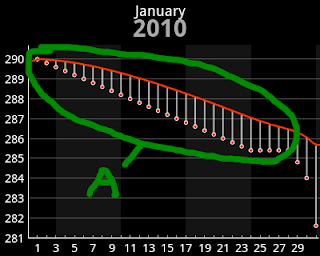 January's trend can be attributed to two main elements: A return to work, and the arrival of my stationary bike.
Return to work didn't only mean that I had two imposed 10-minutes walks (to the subway and back), but mostly a slightly more active lifestyle with much less access to crap food like cake or chocolate, which strangely always managed to find their way into my cupboard.
As far as biking went, things were a bit awkward. The tool is one thing, the routine is another. Still fixated on finishing my game, even a few minutes a day appeared a lot. I started with 40 minutes routines during the evening. I couldn't manage to do them more than twice or so a week. It always felt like wasted time, and was unsustainable.
I still wonder how I managed to lose the 4.2 pounds I did. I attribute it to the fact that the first pounds are the easiest to lose.
Note that the big "A" zone in this image marks a time when I did not weight myself or did not enter the data in the spreadsheet. I just had a starting value (290) and an ending value (285.5). 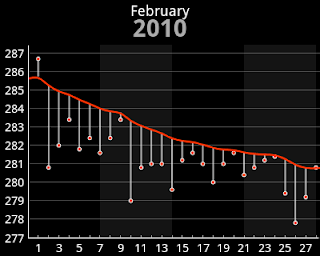 Across January and February, different food rationing attempts and exercise routines were made. None of them were particularly effective. Either because they didn't achieve much, or were untenable. Finding a balance between "not enough result" and "so much effort it can't be sustained" would become the most difficult part of this effort. Still, another 5 pounds gone. It appeared that even though my rhythm was erratic, the effort was paying off. 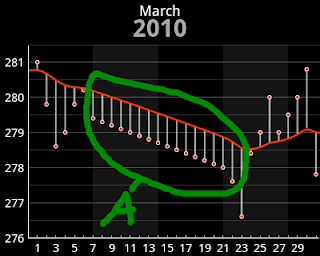 March marked the very first bump. There would be more, but this one was the first, and it hit pretty hard. I was fully expecting my trip to San Francisco and the GDC (marked with A) to cause an upturn. But strangely, it was far otherwise. However, I caught a very bad case of the "con crud", a month-long cold, and went into a complete exercise shutdown just following the GDC. That prolonged period of idleness whose beginning is shown here, would see its effects continue in April. (Note that I did not weight myself during the period of the GDC).
As a first quarter go, this one wasn't so bad. From a 290 to a 279 trend 12 weeks. In three short months I had lost everything I had gained during the last year, so I had every reason to look up.
I had no clue that in a few more months, one of the main reasons why I managed to lose that weight would disappear.
Lesson learned: Finding a rhythm that's sustainable and delivers results is of the utmost importance. Accept that your first attempts may not be well-adjusted, be ready to readjust.
More to come in Quarter 2: Rhythm Found.
Posted by Unknown at 21:18