I deliberately left a piece of the story out of the last entry, because this quarter will be devoted almost exclusively to it. Even though it entered into (dis)service in June, its full effect became quite obvious in the third quarter.
A company that prides itself into offering its employees classes on health and fitness, a company that has been exclusively offering fresh fruit as snacks to its employees. That same company started offering candy bars and chips in the kitchen, inside a dark gray monstrosity of a vending machine. Right next to the water cooler. But these blog entries are about the numbers, so let's start with July: 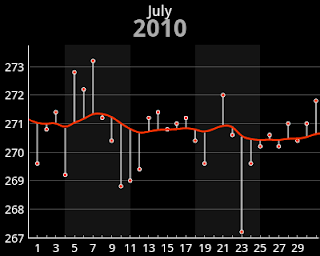 With a -0.4lbs (I usually round monthly results, not this time). July was very hard. My rhythm was the same, except for that blasted machine. Compulsion works rather sneakily. You slip once, you slip twice, pretty soon you just give up on that week, and then on the month. Although there are healthy options in the machine, what power do these wield? Not much. I was still, strangely, unable to pinpoint the machine as the source of my failure. I failed to see just how much money I was pouring in it. It would take another two months for the wake-up call. 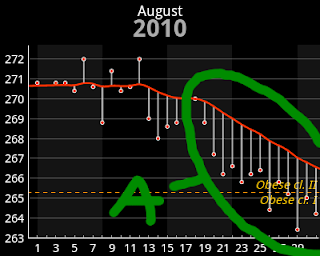 August started much as July ended. In a complete stand-still. Despite sweating my ass off on my bike and rationing my food intake at home, there appeared to be no way of breaking off that stalemate. Until the final weeks of the month came. Then all of a sudden my weight started to drop, in an abrupt fashion. I was relieved. August would salvage my efforts with a striking -4lbs, most of which took place in the final two weeks. It was only a few weeks later, after isolating this drop, that it became clear. My weight dropped while I was on vacations (Marked A).

There is a reason why my first entry dealt with 2009. It is clear that staying home was a huge problem when it came to sweets and fat accessibility. If, from my home workstation, I only needed to walk five feet to get some crap food, then there is a problem. My workplace environment provided a sanctuary, a place where in order to get crap food, I needed to make an effort for it.
The machine turned that reality upside down. My workplace environment became much more hostile than my home environment. Even though the latter remained as poisonous as ever. That new reality would now lead to the complete failure that is September. 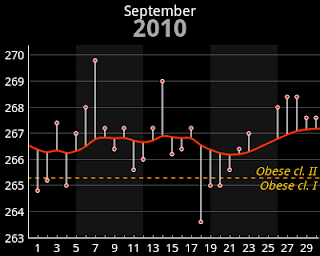 Late August's drop misled me. I really thought things were under control. As September began, my weight zigzagged around my trend line. I was unable to make any progress. By the middle of the month and an endless array of quarters swallowed by the machine, it became obvious that I was losing this battle. Protests against the machine's presence or its content were quickly dismissed or laughed away.
The third quarter was certainly the hardest, with a grand total of four pounds lost. Although my resolve was strong, and my efforts as far as biking and controlling my home food intake remained, it was obviously not enough. When September ended with a positive +0.8 lbs, it became obvious that drastic measures were necessary.
Lesson learned: Never think things are under control, and don't expect or rely on outside support.
More to come in the fourth and final quarter of 2010: The Most Wonderful Time of the Year.
Posted by Unknown at 18:47